Every few months we (Roundarch) host the IxDA meetings here in our Chicago office. This month’s meeting provided the opportunity for Scott Judy, Rhazes Spell and myself to present some thoughts about and answer questions pertaining to Data Visualization.

We decided to craft our presentation a bit differently than one might expect, as we realize that Data Visualization can be somewhat of a dry topic, and far too often thought about only in the context of charts, graphs and the occasional heat-map.

In an effort to stir things up a bit, show a different perspective on Data Visualization and stimulate a wide range of conversation on the topic, we decided to present things in a bit more of a free-form manner. Scott kicked things off and gave a demo of some of the work that Roundarch has done for the US Air Force.

Next-Generation Data Visualization Example: US Airforce
We have a big team at Roundarch that works on project for the United States Air Force. As you can imagine, there is a lot going on at the Air Force these days, and all of that activity means an incredible amount of data that can be leveraged for dashboard reporting, etc. For obvious reasons, we couldn’t share any actual Air Force system with the audience, but our team was gracious enough to give us access to a prototype application that sits on top of a real data environment (with mocked-up/fake data of course).

Once Scott gave a healthy dose of serious data visualization and dashboard/score-carding in Adobe Flex, he moved on to several other applications that others have built. The rest of the presentation was peppered with out of the ordinary examples of how people are helping users to visualize information… “data”, if you will.

Other examples that Scott shared included:

When Scott was done and he handed the floor over to me. I simply played middle-man between Scott and Rhazes. I really just wanted to keep it simple and segue from Scott’s examples to some of the conceptual and theoretical examples that Rhazes was going to talk about.

I took about 5 minutes and shared a fantastic example of geo-centered, real-time, streaming data that has been created by my friends at Universal Mind, and Doug McCune… one of the most wicked Flex developers on the planet. This sample application demonstrates how a rich client interface could be used to assist police dispatcher’s or other public safety officials with directing first responders (police in this case) to the scene of an accident, crime or other situation. This demo, called LAUNCHpad is pretty interesting and a great example of actionable data visualization.

I then introduce Rhazes by leading in with the topic of passive data visualization, something I believe will become more prevalent over time as hardware gets less expensive and ipv6 becomes more of a reality. Living in Chicago, I can see the top of the John Hancock building from my back deck. As you may know, the lights that form a band across the top of the building change color based on events, celebrations, calendar dates, and (I think anyway) the weather.
By just glancing towards downtown, I am given a visual cue about something. I think this gets really interesting when you think about how it could be applied to things in the future, and on a micro level.

Turning things over to Rhazes, the group got about a half-hour brain dump from one of the brightest guys that I know. Not only do I admire Rhazes Spell for his aptitude regarding really complex things… the guy is going to be in my wedding… so I gotta love him for that. Anyway, Rhazes really blew people’s minds I think. I listen to this guy talk all the time and he never ceases to bring a fresh perspective on just about any topic. 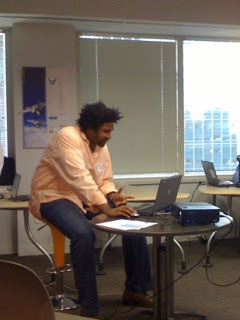 Rhazes talked about data visualization from his own unique perspective: a guy who really started developing software so that he could create his own views of repeating patterns in gene sequences while working towards his PhD. He showed his own work, and then went wild with examples of different types of data visualizations that have inspired him.

Here’s a list of some of the examples that he showed and talked about. (warning: these are very cool and can consume many hours of your time!)

After Rhazes finished up, we answered questions from the great group of Chicago design professionals in the room and eventually broke out of any sort of form and had a fairly lively group discussion related to not only data visualization, but the challenges of implementing more robust data visualization client technologies… from initial design to development and throughout deployment, including analytics and trend measurement.

I find it interesting that every time I end up giving a presentation about user experience design and “next generation” online applications, there always seems to be more questions from the audience related to business aspects than those of design or technology. When I say this, I mean that majority of the questions seem to be about how you can convince your clients to be forward thinking, how to get your boss to allow you to innovate, and how to express the importance of user experience and experience design over the existing stack of “approved” technologies within corporate organizations.

All in all, it was a fun experience and I think it was pretty valuable for everyone who came out to participate. The IxDA group here in Chicago has a pretty strong representation from most of the “players” in the interactive/web/user experience community, and it is a pleasure being able to host meetings at the Roundarch office.

View Video of our Presentation

Microformats, A Primer – Simple Semantics for the Web

Putting Chicago on the Cutting Edge of Emerging Tech