I’ve been doing a bit of research for a project where I am mixing and matching colors for the user interface of a web site. This project is not unique that it has the requirement to match the brand’s colors, but as an application, the look and feel of the brand needs to be able to also be experienced in the color of icons and supporting UI graphics that appear as part of the site’s User Interface.

In addition, as the the site is going to have ad-serving capabilities that will drive both “off site” as well as on-site promotional images that should “fit” into the design of the site. All basic issues of design for the Web when you are creating a heavily branded, yet sophisticated “utility-like” Web application. Our team is working under the best-practices principal that color-only should not be used as a solo visual indicator. As we get closer to finalizing the user interface, I’ve been doing a bit of thinking and additional research on the topic.

Ironically, today, while browsing my google home page, I came across an article that appeared on Wired.com about the subject. This piece, which is actually an Associated Press article deals with the problem faced by those with color blindness when using computers and a new software product called EyePilot that is going to be aimed at helping to take accessibility to yet another level.

I understand the frustration that can be encountered by those who suffer from color vision defects, as my Dad has been slightly affected by red-green color blindness since I was a kid. While it never caused any major issues, it was sometimes a source of comedy as he and my mom would pick out furniture, rugs or paint. I do wonder, however, how his interpretation of financial charts, graphs and business data could have been impacted over time… At least made less frustrating if color blindness was taken into consideration more often when designing digital content (and especially for the make audience).

Color vision defects usually affect people in one of two ways: red-green confusion and blue-yellow confusion. These common forms are inherited as a sex-lined recessive trait, making females carriers and makes more likely to be affected. While only 1 in 100 females are color blind, 1 in 8 men are colorblind to some extent.

This raises two rather interesting issues for usability professionals as well as user interface and creative digital designers. The first of these points is just a question: How often do you or your teams take this into consideration when user interface color schemes or artwork? This obviously is much more of a consideration with male-centered content as well as for brands that have either a “red-green” or “blue yellow” color palette, however even in the design of icons, link & text colors, and other UI elements should see this as a consideration during the creative design strategy and conceptualization.

The second issue is that software such as what they talk about in the Wired article (EyePilot), can offer even more challenges for design teams as users may eventually end up with full control over the colors that are being displayed on their own computer monitors. I realize that this sounds a little “far out”, however almost as soon as we had “desktop /windows-based’ operating systems, users showed a desire to be able to customize and personalize their digital environment. For many computer users customizing icons, desktops, color palettes, and fonts has become a regular practice for them on their mac, windows and linux-based computers.

This most definitely carries over to mobile devices as well. Screen savers, ring-tones and phone background pictures account for one of the fastest growing segments of personalized content and is now a huge source of revenue for mobile providers as well as 3rd party content creators.

I question whether or not the evolution of both accessibility as well as user customization for digital platforms will introduce the wide-spread ability for users to control how their computers, phones and other screens display color information. Will operating systems eventually have a “color control kit” built in? Will users eventually be able to control the color schemes of any user interface that they work with? Could a user who just loves orange and brown make every piece of content that they view on-screen take on their favorite color palette? Will users eventually have control over things to an extent that the colors picked by design professionals be as easily overridden by ambitious users as the fonts on a web page?

Whatever the future holds, I think that both of these points raise interesting points:

I feel that the answer to the first point is a loud and clear “yes”, especially when designing content that will be geared towards men who are much more likely to suffer from the impairment. I am not saying that this should be a major focus of design efforts by any means, however taking it into consideration is truly a best-practice consideration of both accessibility and usability for digital design.

Point number 2? I suppose only time will be able to tell us the outcome. I suppose that the experts at Apple and Microsoft have aired this out during previous operating system designs, and have done their own research into the topic. Because of this, I also assume that they’ve determined that the current maturity of user behavior doesn’t warrant the ability to override colors in this manner. One thing that is clear is that both Apple and Microsoft spend a ton of time and money researching color.

Then again, it could be hiding in the “Field of Dreams” effect: “If you build it, they will come” (or customize their colors if you will).

Some links of interest on the subject:

This micro-test for color blindness consists of a set of five images. Each image shows a number in one color on a different backgound color. 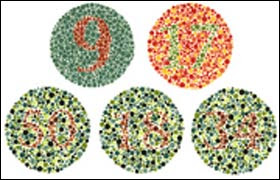 People with normal color vision will have no problem seeing the numbers contained within, but people with color blindness will see only random colored dots. What do you see?

Seventy-five percent of color blind people have poor green perception. Of the remaining, 24% have poor red perception, and one percent are affected by a rare tritan type.